PLEASE NOTE: That our payment E-mails have changed. Please read instructions carefully at the check-out page. Its still cold outside unfortunately. Don’t head outdoors when you don’t have to. The world is a cold place, and since the information age of tomorrow is today, you can just stay inside and let everything good come to you. Order delivery, work from home if you have to, and get some bud delivered directly to your door from Doob Dasher. But there’s one thing you’re still missing. Entertainment. So we’ve put together a list of the best movies for you to enjoy while staying warm and stoned out of your mind. Yes, this is an incomplete list because to name them all would take far more space than allowed by the confines of this article. So, in no particular order, here are 10 of the best movies for you enjoy while baked.

You may have seen this already, but if you haven’t already, get on it now. This is a modern stoner classic almost unrivaled in its humor and creativity. Seth Rogan and James Franco form the ultimate stoner duo who set out to smoke the rare and titular strain, Pineapple Express. Few movies have reached this peak of culture, excitement, and comedy. Roll up a blunt and ride the express.

If you get too far into a list of stoner movies without seeing a Cheech and Chong movie, exit out immediately. They are the duo that started it all. Staring Cheech Marin and Canada’s own Tommy Chong, this is a classic road movie of two stoners who get into trouble, and end up in a band. Don’t look any further if you haven’t watched this before. So many modern stoner flicks can trace their roots right back to these two, and Up in Smoke might be their masterpiece. Check it out before some pretentious stoner calls you out (we never would).

An all time great movie, even ignoring the stoner aspect. Richard Linklater crafted a perfect tale of coming of age in the 70s. Following kids around as they party, chill, and look for their place in the world, this film launched several careers, and is responsible for a number of classic lines. Even if you don’t seem interested now, you should watch it just for the classic Matthew McConaughey role and the “alright, alright, alright” line that has endured 40 years of use.

This might seem like a weird choice, but as a stoner you have to appreciate the dedication these filmmakers had to making weed seem like the Devil’s herb. A propaganda flick involving the evils of smoking the reefer, this is an absurdly good time, especially when you have already smoked some of the good stuff yourself. This film might not be for everyone, so if you are actually concerned about the side effects of weed, maybe skip. Its not outright funny, just funny in its ideas and execution.

Any list is basically required to put this film on it. It is just an absolute classic that has only gained in popularity since it was first released. The dude is an all-time stoner who just wants to relax, smoke weed, and listen to Creedence. Things aren’t that easy, especially when he becomes involved in a kidnapping plot. Watch this for the classic lines, the great direction, and some of the best movie bowling scenes this side of Kingpin. The Coen brothers crafted a masterpiece that won’t be going anywhere anytime soon.

6. Fear and Loathing in Las Vegas

This one is a trip, friends. Be ready for a wild ride that may make some uncomfortable thanks to insane visuals and obscene drug trips. Hunter S. Thompson’s famous story is brought uncomfortably to life by director Terry Gilliam and Johnny Depp, who gets fully into the role of drug-addicted paranoid writer, Thompson himself. Watch this if you want to get the classic “mindfuck” and if you love trippy stuff. Good luck with this ride.

It wouldn’t be fair if Cheech & Chong didn’t end up on this list twice. They’re just too important in the stoner pantheon. The two classic clowns struggle to find a source of income in Los Angeles, taking them on a wild ride that hits some very unexpected notes. Don’t think that because this one is second it is any worse than Up in Smoke. Many people prefer this, and their opinions are just as valid. We can’t recommend these two enough.

Get well soon Kevin Smith. The New Jersey native recently just had a heart attack, but is safe and sound. Good thing too, since he has made some stoner classics in his time. Nothing embodies his style more than his cult favorite debut film, Clerks, that spawned his career. This is a small story about two store clerks living their lives, playing hockey, and struggling with love. It also introduced two important stoners in the hall of fame, Jay and Silent Bob. 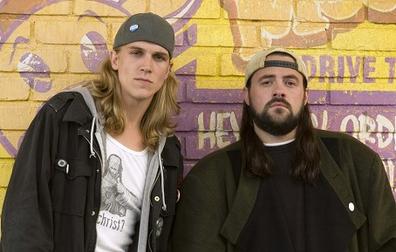 Another modern film that hit big based on its silly premise and over the top story. Starring Kal Penn and John Cho, who attempt to, you guessed it, go to White Castle. Things aren’t always as easy as they seem, and our duo finds themselves on a wild ride than has them cross paths with cops, rednecks, and, of course, Neil Patrick Harris.

10. Monty Python and The Holy Grail

This film actually has nothing to do with drugs, but it makes the list because it is hilarious and goofy and perfect for watching while high. A classic of epic proportions, Monty Python and The Holy Grail follows the knights of the round table trying to find the titular enigma. Monty Python arguably hit their peak with this insane and silly adventure. Expect lots of laughs, lispy Frenchmen, and lots and lots of coconuts.   So there you go, a long list of movies to keep you happy and indoors through the wild winter. Don’t forget to get some but to help you down this rabbit hole of emotion. Until next time, good luck and stay warm!